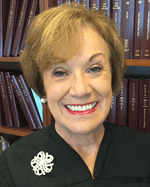 Valerie P. Cooke has served as a United States Magistrate Judge since 1999. During her tenure on the bench, Judge Cooke has devoted significant time to the advancement of alternative dispute resolution in the federal courts. She served on the Ninth Circuit’s Alternative Dispute Resolution Committee from 2001 to 2013, and as its chair from 2008 to 2013. In her work as a Magistrate Judge , Judge Cooke has presided over several hundred settlement conferences and early neutral evaluations in virtually all types of cases filed in federal court.

Judge Cooke’s primary focus on ADR in the federal courts has been on Section 1983 inmate civil rights litigation, since these cases comprise an estimated thirty-six percent of the Ninth Circuit’s case load annually. In 2007, Judge Cooke created an inmate early mediation program in the District of Nevada by which all Section 1983 inmate cases are sent to early mediation after the court screens the complaint. The case is stayed for ninety days to allow pro bono attorney mediators to resolve the case before discovery and litigation begin. Approximately thirty percent of these cases are settled annually at the early mediation.

Judge Cooke co-chaired the Ninth Circuit’s 2015 Corrections Summit, which was the first of its kind in the nation. Attendees at the Corrections Summit included federal judges, state and federal corrections administrators, deputy attorneys general from every state in the Ninth Circuit, and plaintiffs’ lawyers. As a result of the summit, each district in the Ninth Circuit created a working group of these stakeholders who are committed to addressing inmate litigation issues of particular interest to that district. The District of Nevada’s working group has targeted several projects and continues this unique collaboration among the stakeholders.

In 2011, Judge Cooke initiated the District of Nevada’s first federal reentry court to assist federal inmates who are released from prison and who serve a term of supervised release. CLEAR Court (“Court Led Efforts at Recovery”) is a voluntary program. If participants successfully complete a year in CLEAR Court, they graduate and receive one year off of their supervised release. The CLEAR Court team includes Judge Cooke, an Assistant United States Attorney, an Assistant Federal Defender, a United States Probation Officer, substance abuse and mental health treatment providers, and a back-up Magistrate Judge. The goal of reentry court is to support people being released from prison so that they can reintegrate into society, reunite with their families, maintain employment, remain free of substance abuse, and not re-offend. To date, thirteen people have graduated from CLEAR Court.

Judge Cooke has also welcomed international visitors to her court and her home through the Northern Nevada International Center and the U.S. State Department. The goal of these visits is to teach individuals from emerging nations about our judicial system and the rule of law in the United States. Over the years, Judge Cooke has welcomed hundreds of judges, lawyers, NGO representatives, and police officials from over 110 countries. She has also taught mediation and negotiation in Argentina, Chile, Spain, Malaysia, and the Marshall Islands.

Judge Cooke has served on the board of the Federal Magistrate Judges Association and the Ninth Circuit Magistrate Judges Executive Board. She has lectured and taught mediation and case management for the Federal Judicial Center, the University of Nevada Boyd School of Law, and for many state, federal, and local bar organizations.