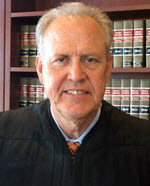 George Foley, Jr., was appointed as a United States Magistrate Judge in August 2005. Prior to his appointment, Magistrate Judge Foley was a partner in the law firm of Pearson, Patton, Shea, Foley & Kurtz, where his practice was primarily devoted to insurance coverage, bad faith, legal malpractice and general civil practice litigation. He began his career in partnership with his father, George Foley, Sr., in the areas of criminal law, divorce and domestic relations.

Magistrate Judge Foley is a 1977 graduate of the University of Nevada, Las Vegas with a bachelor of arts degree in History. A fourth generation Nevada lawyer, Judge Foley graduated from the University of the Pacific McGeorge School of Law in 1980 where he was class valedictorian and a member of the Order of the Coif. Judge Foley has served as member and vice-chairperson of the State Bar of Nevada Southern Disciplinary Board, as a member and vice-chairman of the Standing Committee on Judicial Ethics and Election Practices, and was also a member of the Nevada Board of Bar Examiners