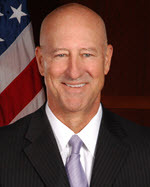 Judge Hoffman was appointed as a United States Magistrate Judge for the federal district of Nevada on August 5, 2011. Prior to his appointment, he was the General Counsel of the Clark County School District, where he managed the delivery of legal services to the District and elected members of the Board of School Trustees, and practiced law in a variety of legal topics, including employment law, personal injury, civil rights, business transactions, and education law.

He has been practicing law for over 30 years in both state and federal courts, is a member of the Nevada and California bars, and served for seven years on Nevada’s Commission on Judicial Discipline, which is responsible for the investigation of complaints and discipline of Nevada judges. He has also served as a hearing officer for the Nevada Department of Personnel. He was an adjunct instructor at the University of Nevada, Las Vegas, and Nova Southeastern University in Las Vegas teaching courses on Education Law for over 10 years.

Prior to his arrival in Las Vegas, he served in the United States Marine Corps as an infantry officer and then a judge advocate in assignments including criminal prosecutor and defense counsel, Special Assistant United States Attorney, and a legal advisor to the United Nations Military Armistice Commission in the Republic of Korea. He also served as a legal counsel to the Chairman of the Joint Chiefs of Staff, and as the operational law advisor for military operations, including international counter-narcotics and counter-terrorism operations at Headquarters, U.S. Marine Corps.