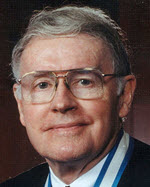 Judge George was a pilot in the United States Air Force. He received his bachelor of science degree in 1955 from Brigham Young University, and his J.D. degree in 1961 from the University of California at Berkeley (Boalt Hall). Upon graduating, he returned to Las Vegas where he built a successful private practice.
In 1974, Judge George was appointed to the United States Bankruptcy Court for the District of Nevada. During his ten years of service as a bankruptcy judge, he served on and was instrumental in the creation of bankruptcy appellate panels which permit panels of three bankruptcy judges to hear appeals directly from bankruptcy courts.

Judge George has distinguished himself as an expert in the organization of the judiciary. While serving on the International Judicial Relations Committee from 1993 to 1997, he and other judicial colleagues from various countries participated in numerous seminars and lectured on constitutional issues and court structure in Eastern Europe and the nations of the former Soviet Union. In 1996, he chaired a committee that worked to update the long-range national plan for the judiciary. He has also been a board member of the Federal Judicial Center (the education and research arm of the federal judiciary) where he served for four years with Chief Justice Warren Burger.

He has authored articles on the administration of the federal judiciary, ethics and insolvency. He has won many awards, including the Brigham Young University Alumni Distinguished Service Award, the Notre Dame Club’s John C. Mowbray Humanitarian of the Year Award, and the Boy Scouts of America Silver Beaver Award.

At the commencement at BYU in 2001, Judge George was the recipient of the Presidential Citation. In 2005, he received the Jensen Public Service Award from Boalt Hall, University of California.