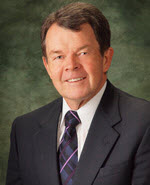 Judge Dawson was confirmed by the United States Senate in May 2000 to fill one of the newly authorized seats in the United States District Court for the District of Nevada. He received his undergraduate degree in1969 from Weber State College in Ogden, Utah, where he attended on athletic and music scholarships. After graduating from the University of Utah Law School in 1971, he clerked for Judge James Guinan in the Second Judicial District Court.

Judge Dawson became Henderson City Attorney in 1972 where he served until 1979. During that time he was instrumental in the creation of the Henderson Public Improvement Trust, an issuer of tax exempt bonds. During his service, he represented the city in attracting Ethel M. Chocolates, Levi Strauss, Breyer’s Ice Cream and many other businesses. He was also instrumental in the first issuance of industrial development bonds for the cities of Las Vegas and North Las Vegas. Infrastructure for the master-planned communities of The Lake at Las Vegas, Green Valley Ranch, McDonald Ranch and Seven Hills was financed with tax exempt bonds during his tenure. Those communities have been the driving force behind Henderson becoming one of the fastest growing large cities in the United States for the past several years. Judge Dawson served as legal counsel for the Trust until he became a full-time judge.

Judge Dawson was in private practice from 1979 until 1995. While engaged in private practice, he focused primarily in civil law. He was recognized by the Clark County Pro Bono Project for Outstanding Contribution by a Law Firm. In 1995 he was appointed Justice of the Peace for Henderson and subsequently elected to a six-year term. Judge Dawson was for many years an elected officer and director of the Henderson Chamber of Commerce, having served as President and having received the “Member of the Year” award. He has donated his time in the creation of numerous charitable and community organizations. He has also been licensed as a private pilot with instrument and multiengine ratings. He is admitted to practice in Utah and Nevada.