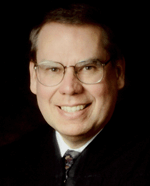 Judge McKibben received his Bachelor of Science degree in Political Science from Bradley University in 1962. He then attended the University of Pittsburgh Graduate School of Public and International Affairs and received a master’s degree in 1964. He received his J.D. degree in 1967 from the University of Michigan Law School. He was admitted to the Nevada Bar in 1968 where he was in private practice until he was elected District Attorney of Douglas County in 1970. He served as District Attorney from 1971 to 1977. Governor O’Callaghan appointed Judge McKibben to the Ninth Judicial District Court in 1977 where he served until 1984.

Judge McKibben and his wife Mary Ann have two children and four grandchildren.