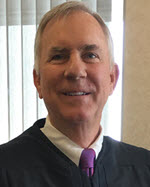 Judge Robert Clive Jones was appointed United States District Judge for the District of Nevada by President Bush in October 2003. He was born and raised in Las Vegas, Nevada. He is married to Michele Bunker Jones and is the father of four children.

Judge Jones passed the CPA examination in 1971 and obtained his CPA Certificate in November of 1976. He clerked for Judge J. Clifford Wallace, Ninth Circuit Court of Appeals, and practiced law from 1976 to 1983. He is a member of the State Bars of California and Nevada and has been admitted to the United States Tax Court.